I put up a portfolio blog
Posted by Steve LeCouilliard at 4:42 PM 4 comments:

Email ThisBlogThis!Share to TwitterShare to FacebookShare to Pinterest
Labels: portfolio 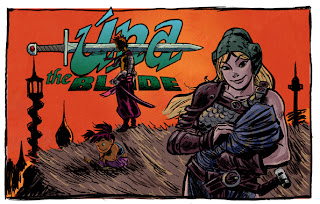 I am proud to announce that Una the Blade is finally, actually on it's way to becoming a real thing. I have enlisted an impressive roster of talented creators from among my friends who will illustrate short, stand-alone stories which I will write to accompany the main storyline.
Simon Roy (Prophet)
Katie Shanahan (Silly Kingdom)
Thomas N. Perkins IV (Ben 10, Avengers EMH character designer)
Rebecca Dart (Battle Kittens, MLP:FIM)
Dershing Helmer (The Meek)
Dave McCaig (DC comics colorist, The Batman color designer)
Enrique Rivera (Skullkickers)
Ryan Lovelock (Character designer/storyboard artist)
Michael Stearns (Dawn of Time)
DC Miller (Animation professional/character designer)
The plan is still to release digital issues online with the possibility of print editions if there is sufficient interest in a Kickstarter campaign. I am open to receiving pin up or fan art to include in the series. Contact me if you're interested. This is going to really be something, so don't miss out!

Posted by Steve LeCouilliard at 3:37 PM No comments: 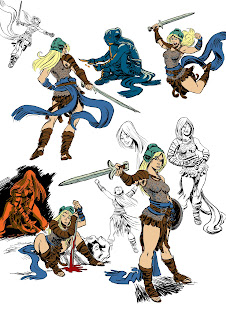 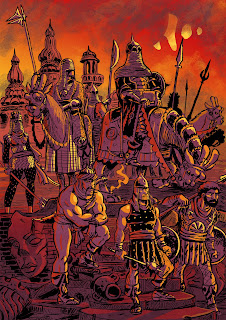 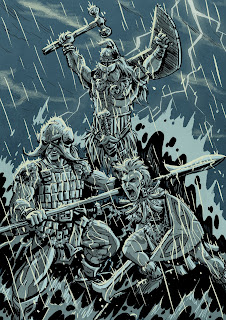 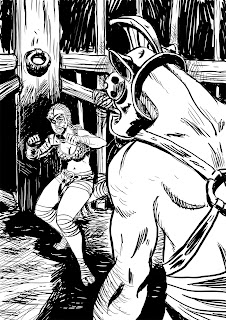 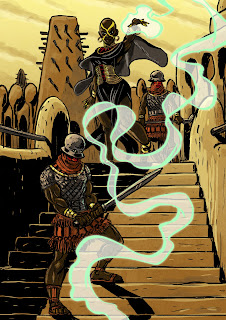 Posted by Steve LeCouilliard at 10:51 AM 2 comments: 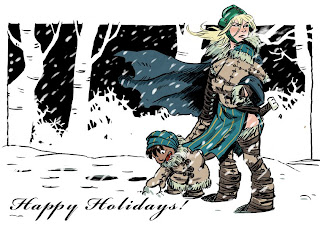 Posted by Steve LeCouilliard at 6:21 PM No comments:

Some o' that there Japanimation that the kids are all crazy about.
Posted by Steve LeCouilliard at 8:47 PM No comments: 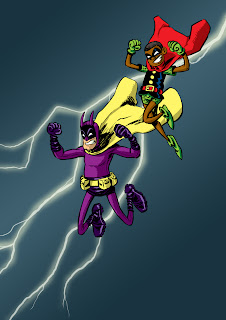 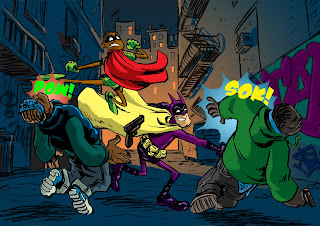 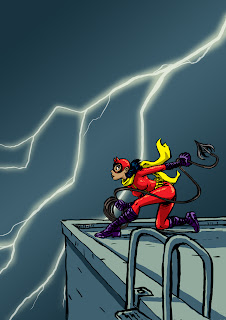 I guess I have Batman on the brain. To avoid getting my ass sued off, I’ve switched to another Golden Age superhero, now in the Public Domain, who’s similar enough to Batman that I can draw obvious parallels, but not be confined to a direct parody. His name is—wait for it— Mister Satan! Seriously! He was created for Archie Comics back before it was Archie Comics and discarded when the company decided to become squeaky clean and wholesome. His companions are Devil Boy and Devil Girl, both my own additions.
Posted by Steve LeCouilliard at 10:18 PM No comments: 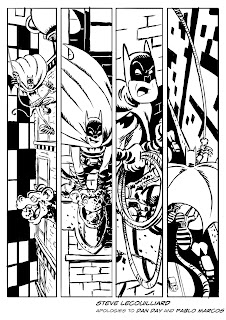 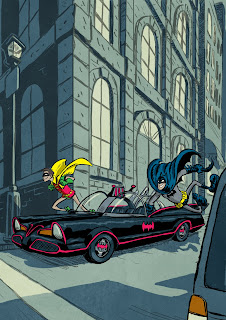 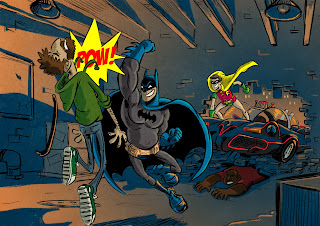 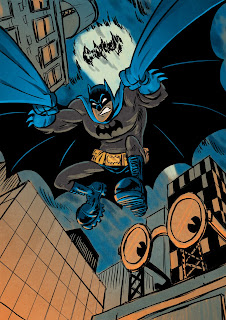 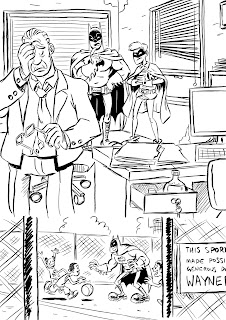 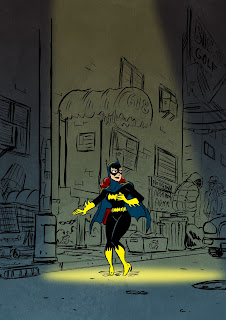 Okay, so here's my idea for a bootleg Batman comic. I expect it won't be very popular with fans of the ongoing Batman comics.

Eccentric Billionaire Bruce Wayne, motivated by the tragic murder of his parents, devotes his life to fighting crime in his home town of Gotham City. Wayne has devoted his considerable fortune and intellectual resources to the study of criminology and crime prevention. His Wayne Foundation donates enormous sums of money to Gotham's Police Force, infrastructure, school system, prisoner rehabilitation programs and civic restoration. For this reason, the Mayor and Police Commissioner James Gordon indulge Wayne's mania for dressing up in a bat costume and fighting street-level crime with gadgets. Bruce Wayne believes his identity is a secret, but really everyone who's met Batman knows who he is. It's painfully obvious. As long as the money flows and the crime rate keeps dropping (it's down dramatically since Batman's campaign began) the civic authorities are willing to play along. The situation became more complicated when Bruce adopted an orphaned teenager named Dick Grayson after the boy's parents were murdered. It's become harder to turn a blind eye to child endangerment, but so far, the kid has been well taken care of and nobody wants to upset the apple cart.

Batman's fists-first approach to crime-fighting may be a little silly, but Bruce Wayne is still an excellent amateur sleuth and the police, however reluctantly, sometimes will turn to his expertise. As a fail-safe though, Commissioner Gordon has made a deal to reduce the sentence of a certain long-serving prisoner if he'll agree to dress up as a super-criminal called the Joker and distract Batman's attention when the police really need him out of the way.

My story concerns Dick Grayson growing up and coming to terms with his adopted father's psychological problems. Batman is a kind of Peter Pan figure. A boy who never grew up and Dick needs to decide whether he can keep playing dress up with Bruce or if it's time to leave fantasy behind. I think this could be a bitter-sweet and funny little story about children and adults and how age isn't always the thing that separates one from the other. I don't want it to be gloomy or depressing, Bruce Wayne's mania is kind of sad, but his colorful world of good guys and bad guys is fun and exciting. I'll also need an outside character, a reporter or a federal agent, likely a woman, who can be the reader's entry point into the weird world of Bruce Wayne.

Posted by Steve LeCouilliard at 9:32 AM 2 comments: